I've been planning to run a game on second edition rules, but I'm having a bit of dilemma. I feel like getting a mat that has either hex or square grid, but I'm not sure how it would work in EP. I have played dnd, which actively supports grids and has defined how grids would work. In case of EP I'm not sure.

So what I would like to know is, how do you run your games? Do you use grid and if you do then which type? Or do you prefer a theater of the mind. Any tips for a starting GM would be greatly appreciated!

I tend to go for more simple

I tend to go for more simple maps. I find I rarely need that level of granularity that a grid provides. A lot of my combat tends to be ranged, so players rarely need to move from target to target, and the weapons I tend to see used most often have ranges where they don't take additional range penalties unless firing across a quarter of a football field. Heck, the shortest range you really need to care about that's not "melee range" is 10 meters, or 30 feet.

On top of this, even with a map a little bit of theater of the mind is required anyway. A lot of locations have microgravity, where moving around in 3 dimensions is trivial. Even planetside a lot of action may be done in urban environments where skills like Climbing and Freerunning (all rolled into Athletics in 2nd edition) can create a large degree of verticality. I find it's often best to just have enough to get a good idea of line of sight, and eyeball any distances required.

I tend to go for more simple maps. I find I rarely need that level of granularity that a grid provides.

So you mean like drawing a (crude) map on a piece of paper or a whiteboard just to visualize the combat area?

Now that you've said it, it does seem like the distance isn't that big of an issue, but how would you go about placing covers or advantagous positions? Would you draw them on the map or would you require the players to roll perceive to see if they can notice a cover and then draw it on the map?

Pretty much, yeah. A crude

Pretty much, yeah. A crude map, and a description of what the elements in the room are. I'd place cover on the map, and I wouldn't require a perceive check to find one: anything that works as cover is going to be large enough that they can easily find it. Also if a player makes a convincing argument for cover existing that I didn't place on the map (Say, I describe a lab setting and they note that they could knock over a table), I would add it to the map. Likewise if they use flex to introduce cover to the scene in 2nd edition. Generally, I add enough stuff for the players to do what I expect them to do. If they ask about anything unplanned, I consider whether it's reasonable that it would be there and make a judgment call on the spot.

Now, while I wouldn't make a perception test to find cover, what I WOULD require a test for is determining where enemy fire is coming from. Finding cover may be easy but there's drastically different line of sights between someone firing from the the end of an alleyway, from ten stories up at the end of the alleyway, and from a flanking position from a window lining the alleyway.

I am primarily a Pathfinder

I am primarily a Pathfinder/Starfinder/D&D5e GM, and when I run Eclipse Phase, I may use a dry erase grid to show rough terrain to better describe where things are at.

Because there is no facing rules or turn radius, etc so you can use either hex or square grid.

The map thingie works great with people used to it, or with players used to abstract games. If you and/or your players are really used and comfortable with grid-using games, a fair compromise is to use miniatures and scatter terrain to represent relative and important positions.

For example, taking a square grid white map, you can simply assign a 3 feet, or 1 meter, scale value to each square, using that to place miniatures for the players and NPC's at tactical distances (for strategic ones, distance vectors might be better), adding a piece of scatter terrain to mark targets or cover (Mantic games' terrain crate for Sci Fi ship interiors is quite good, their Star Saga box is also a good option to get a handful of maps, terrain and doors for really close quarters, like small sections of stations or inside ships), and making some "bulkheads" (let's say a piece of cardboard with some support parts to keep it upright, those don't need more than 20mm height if at all, and a length of 2-3 squares would be enough).

Notice this suggestion of mine is quite abstract, like the drawn map, and takes more work to set up, but also allows better visualization of what is going on, and depending on the quality of the models and terrain (and the paintjob) it can improve the experience a lot for those used to have models on the table.

I use grid mats pretty

I use grid mats pretty heavily when running EP, and used it in a couple of the playtest sessions at Gencon. It's great for immersion if you've got a nice sketch of the terrain or some good scatter terrain, but — and this is super important — distances in EP are very rarely constrained the way they are in D&D.

Movement, for example, allows most characters to cover half the mat in a single round of movement with nothing more than a -20 penalty for shooting while on the move. And weapon ranges mean that you're (at worst) taking a -10 point range penalty for most stuff that would play out on grids. It IS useful for figuring out just how close everyone is to a grenade blast for the purpose of damage falloff, though. Heh.

So, my takeaway is: use it as a tool for helping keep people aware of positioning, a tool for increasing immersion when it's meaningful, a useful reminder of things like "Actually, there's a closed door between you and him". Don't worry about the specifics of movement squares etc unless you're calc'ing damage for explosives.

here's a recent playthrough of Mind The WMDs where I used some existing scatter terrain to lay out a battle area in the Ebb6 settlement ruins. The distances and facing didn't matter as much as helping the players figure out basic line of sight expectations and cover, and they seemed to really dig the encounter. 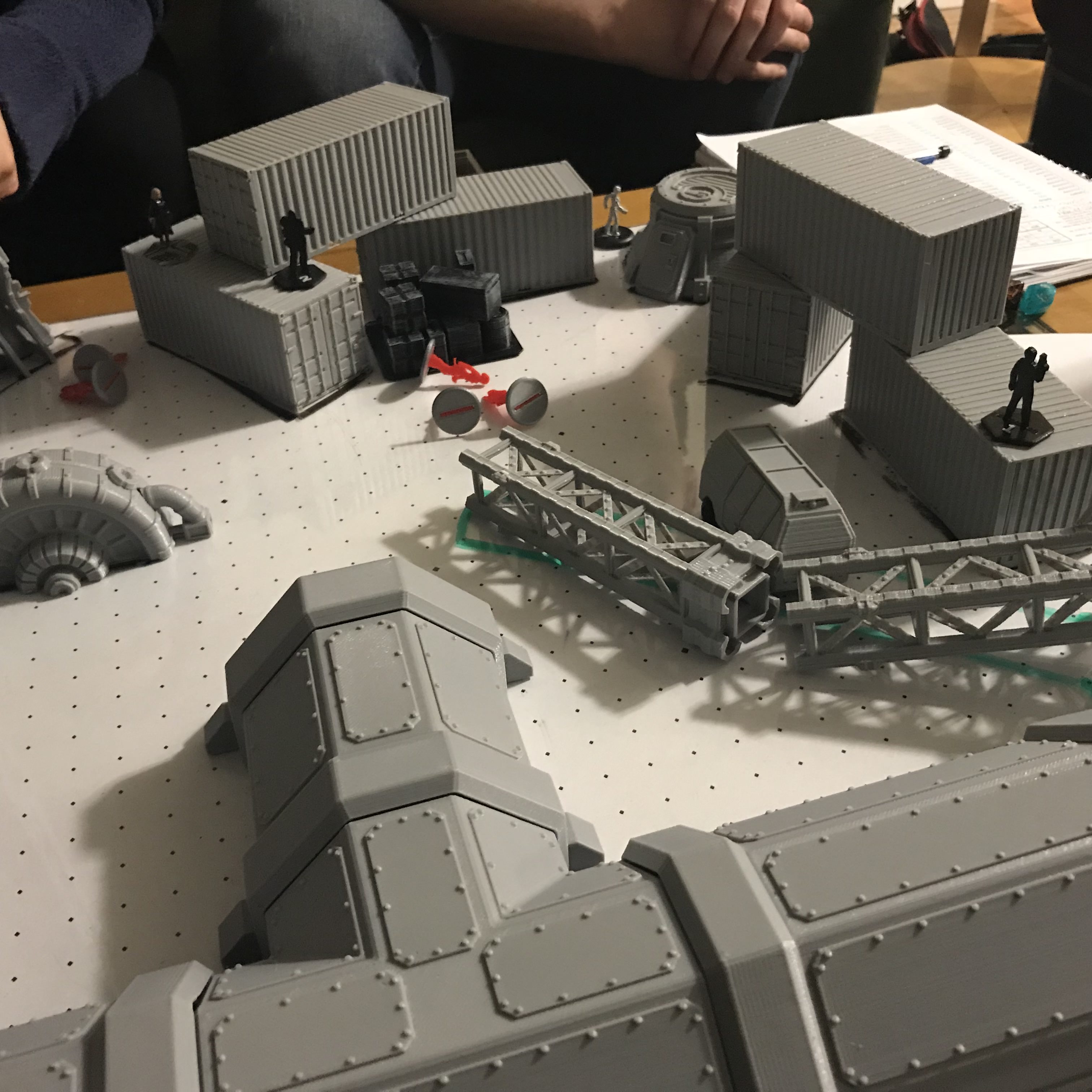 I wanna add two suggestions, btw, since my lightbulb just turned on yesterday afternoon (when I started prepping stuff for painting XD).

First, a GREAT deal for EP "miniatures" is Mantic's Star Saga basic box. Nearly 36 dudes, one of them fairly good as an octopus' morph, another quite like a drone. The rest are a bunch of marines, four infected dudes, four inmates/dockworkers, more characters, and a big, bad ape-like infected thingy. Plus tons of scatter (some boxes, some tables, two weapon racks, two lab tubes, two storage shelves, two cubic terminals, four flat terminals, two machining tables...) and the playing maps (with squares, two-side printed).
Second, there is a huge wealth of paper terrain on the internet. A favourite of mine is Topo Solitario's webpage, and Infinity the Game's downloads section (there is a Maglev terrain pack at the end, filled with cargo containers and with some A4-sized train maps).

Finally, cheap cardboard terrain: Again, from Infinity the game, you can get about 3-4 buildings and about 6 containers (or 3-4 big buildings, 2 bridges & 4 boxes or so) in their terrain packs for about 10 bucks, that are really easy to assemble (and dissassemble, if you are careful): Kurage (industrial grey) & Red Lotus (residential district) come with bridges, the rest vary (Camp Navajo is outside terrain and prefabs-like, the rest ar industrial or lab installations). And all come with a "gaming mat" about 50x60cm or so, themed to the style.